There are numerous answers to this question. Still, nobody really knows until they go through the gate, so to speak. And death brings up so much fear in our culture. This is not necessarily so in other cultures.

Tibetan Buddhists have studied the path of souls through life and death for hundreds of years. The Tibetan Book of the Dead was brought to the west by Sogyal Rinpoche in The Tibetan Book of Living and Dying. And now it has an even greater audience in The Tibetan Book of the Dead, a documentary film narrated by Leonard Cohen. The visual aspects of this film are stunning – from humble monks attending upon the dead and dying to the striking animation of souls in transition. No matter your religious belief or persuasion, this film is a must see by everyone possible. For you never know, it may pave the way out of suffering in the world beyond. Keep an open mind.

Some say this sacred Tibetan knowledge should have been kept secret. But most, I think, agree it is amazing that we have this kind of guide through the world of the afterlife. No other people I know of have a process of collective prayer for 49 days following the death of one’s physical body – assisting the dead through the various bardos, or stages. How remarkable this kind of support exists, so foreign to our death-phobic culture.

You can rent the dvd from Netflix or watch the entire documentary here:

The Tibetan Book of the Dead

Death is real, it comes without warning and it cannot be escaped. An ancient source of strength and guidance, The Tibetan Book of the Dead remains an essential teaching in the Buddhist cultures of the Himalayas. Narrated by Leonard Cohen, this enlightening two-part series explores the sacred text and boldly visualizes the afterlife according to its profound wisdom.

Part 1: A Way of Life reveals the history of The Tibetan Book of the Dead and examines its traditional use in northern India, as well as its acceptance in Western hospices. Shot over a four-month period, the film contains footage of the rites and liturgies for a deceased Ladakhi elder and includes an interview with the Dalai Lama, who shares his views on the book’s meaning and importance.

Part 2: The Great Liberation follows an old lama and his novice monk as they guide a Himalayan villager into the afterlife using readings from The Tibetan Book of the Dead. The soul’s 49-day journey towards rebirth is envisioned through actual photography of rarely seen Buddhist rituals, interwoven with groundbreaking animation by internationally acclaimed filmmaker Ishu Patel. 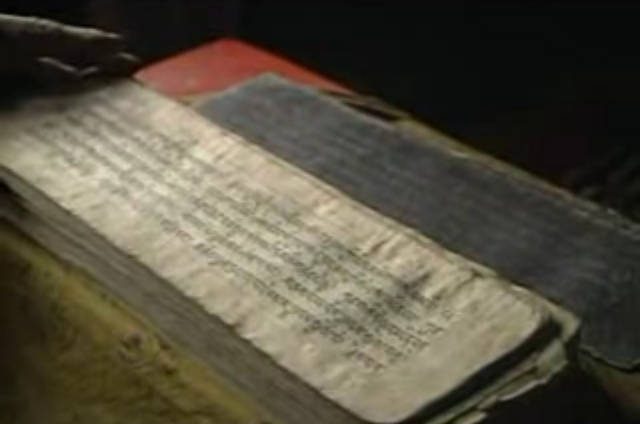 image of original Tibetan Book of the Dead: records.photodharma.net

« Damsel in Distress
Woman’s Guide to Everything: Sex and the Brain »