The Damsel in Distress may be the oldest female archetype in all of popular literature and the movies. She is always beautiful, vulnerable, and in need of rescue, specifically by a Knight and, once rescued, she is taken care of in lavish style. When disappointed, a Damsel must go through a process of empowerment and learn to take care of herself in the world. The shadow side of this archetype mistakenly teaches old patriarchal views that women are weak and teaches them to be helpless and in need of protection. It leads a woman to expect to have someone else who will fight her battles for her while she remains devoted and physically attractive and concealed in the castle. Many women still expect to marry a man who will give them a castle and take of them. And some men are raised to expect to do this (see Prince and Knight).

The Damsel’s fear of going it alone is holds the Damsel/Knight relationship together. It also often shatters the relationship when the Prince or Knight grows older and expects to have a perennially young, attractive Princess at his beck and call. The Princess inevitably grows older even if she remains helpless. Or she becomes more interested in the outside world, develops skills and competencies and is unable to maintain the same old dynamic of dependency. Either way, most Damsel/Prince relationships ultimately find that they change or fail. The Damsel/Princess must ultimately learn to fight her own battles and evolve into a Queen.

The Princess is more often associated with romance rather than distress. She awaits a Knight who is worthy of her beauty and rank and will take her not to his castle but to a palace. The castles that Damsels are taken to have prisons, cold stone walls, drawbridges, and moats. Palaces are fantastically beautiful and charmed and are associated with ballrooms and elegance. The common (archetypal) expression, “Daddy’s little Princess” implies an adoring father who brings up his daughter surrounded by beauty and abundance. There is no “Daddy’s little Damsel in Distress.” The Princess and the Damsel, however, both are taught to be helpless and do share a yearning for a Knight as a partner in life, the implication being that without a Knight, they are powerless in this world. The challenge inherent in these archetypal patterns, therefore, is to do for yourself what you expect the Knight to do for you–provide and protect yourself.

The Princess archetype is also influenced by our colloquial use of the term and especially its heavy freight of anti-feminist connotations of a woman who is overly demanding, as in “Jewish-American Princess” or in the story of the Princess and the Pea. Even when used positively, the word can imply an unreal, bland, or cosseted character, like the teenage daughter nicknamed Princess on the TV series Father Knows Best. But a genuine Princess looks out not for her own comfort and whimsy but for the welfare of those around her. In Asian, tales abound of clever and resourceful Princesses, of conflicts between schools of martial arts for instance in which a Prince and Princess battle it out, as depicted in the Ang Lee film Crouching Tiger Hidden Dragon. And Scheherezade bravely married the sultan who had decided to kill all his new wives at daybreak, and beguiled him with tales for a thousand and one nights until he rescinded his decree, thus saving all the women.

In reviewing your relationship to this archetype, return to your fantasies as a young girl and note what your expectations were in looking for a mate. Most significantly, were you (or are you) consciously or unconsciously awaiting the arrival of your Knight in Shining “Amour”? Did you think or behave like a Damsel? Were you hoping to be rescued? And if you are now coping with the consequences of a broken relationship, can you trace the reasons for the failed partnership back to being disappointed that your expectations as Damsel were not met?

Films: Pearl White in the Perils of Pauline silent films; Fay Wray in King Kong; Betty Hutton in The Perils of Pauline; Jean Simmons in Young Bess; Robin Wright in The Princess Bride; Carrie Fisher as Princess Leia in the Star Wars Trilogy; Ingrid Bergman in Anastasia; Gwyneth Paltrow in Shakespeare in Love; Kate Winslet in Titanic; Jeff Daniels in Something Wild.

Fiction: Gone with the Wind, by Margaret Mitchell; Emma by Jane Austin.

Religion/Myth: Ko-no-Hana (in Shinto belief, the Japanese Blossom Princess, who symbolizes the delicate aspects of earthly life); Io (in Greek myth, a princess and the daughter of a river god, who suffered continually as the object of Zeus’s lust); Princess Aigiarm (strong, valiant daughter of Mongolian King Kaidu who offered herself in marriage to any suitor who could wrestle her down but who, if he lost, had to give her a horse. She never married, and won 10,000 horses). 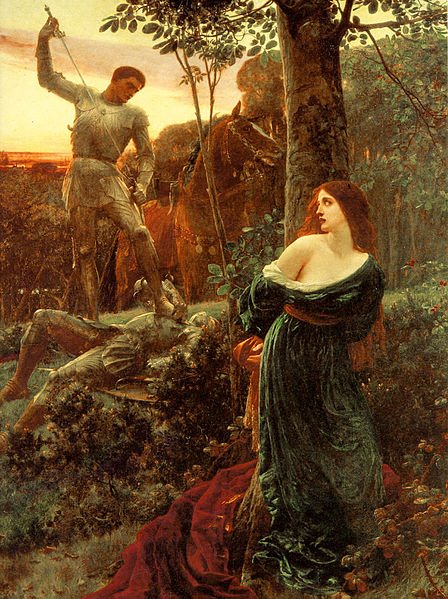 « Six Steps Toward Embodiment
Where Do We Go When We Die? »