As we head into another festive holiday season, I am given to contemplation on the power of food and how it plays into our celebrations. Whether planning a scrumptious repast for Thanksgiving or Christmas, most of us have feelings surrounding the holidays that somehow revolve around what happens at the dinner table.

I came from a history of confusion and power plays around nourishment, which resulted in disorders among us including anorexia and bulimia. It has taken years for me to have a normal, healthy relationship around food. Our mother kept sugary treats locked in a little wooden trinket box in the cupboard. Being children, we were adventurous by nature. Making something patently unavailable only heightened the mystery. What was forbidden became that much more enticing. Some of us were punished not by time outs, but by meals being withheld from us. This actually went on for several years.

If you want your kids to end up with a skewed relationship to food, I can almost guarantee, though certainly would never endorse, this method. If you want to show your offspring who is in control however, regulating food is a damaging and ultimately powerful way to make this statement.

Once we are grown and have the freedom to indulge our choices, some of the first we exercise are those surrounding what we put in our mouths – we get to buy our own groceries, eat boxed mac and cheese and Ben and Jerry’s out of the container for days on end, if that is what we desire. And if anyone says that buying and preparing one’s own food is not an act of power, I beg to differ.

It takes years for some of us to learn to eat well, meaning to eat healthily. This includes knowing when to stop eating so that the stomach has enough qi to digest what we send it. If we listen in this way to our bodies, we make wise choices rather than those that simply elicit comfort. Even then however, conditioning the mind to prefer what is nourishing comes in waves if it comes at all. Most Americans are true hedonists, seeking pleasure and self indulgence at all costs – often to the detriment of our health and well being. I must admit, I love the taste of well prepared food, love textures, smells, savory flavors, warming spices. And it appears I am far from alone.

Our traditionally raised Asian brothers and sisters, on the other hand, likely have learned to listen to their bodies and eat what is proper, depending on the season, the weather and their physical needs at the time. And when they fall out of balance, there is the herbalist housed in a pungent apothecary, magician to the common soul. Mixing remedies from ancient recipes, these formulas perform nothing less than miracles for many, albeit miracles that require the time it takes to re-balance the body. Sadly in today’s world, many on that continent crave instead the sterile machinations of prescription drugs – another power player in the world of consumables.

Neither approach seems right or wrong until we examine statistics: Americans lead the world in heart attacks, most cancers, high blood pressure, neuroses, autoimmune diseases. Even knowing there is a connection between what we consume and our state of health and well being, many of us do not want to make needed changes in our diet or way of living. That is our power, and we maintain it sometimes to the bitter end.

For those of us who love food, preparing and serving meals to our children or loved ones is an act of creativity, grace and yes, of power. We may enjoy cooking for many reasons, among them our awareness of the admiration we elicit when placing tempting dishes before the eyes and palates of those anticipating our special brand of alchemy: that of transforming empty stomachs into feelings of fullness, love and nurturance. And although many of us cooks luxuriate in the process of creating and mastering the art of cuisine for its own sake, without an audience to enjoy and express appreciation for our skills, would we practice them as ardently? Would we assemble exquisite dishes for ourselves alone? Most of us, I’ll wager, would not.

And that, my friend, is a potent taste of our own power to charm, to entice, and to lavish upon others an abundant and very special kind of attention: the love, the power and the glory of food. 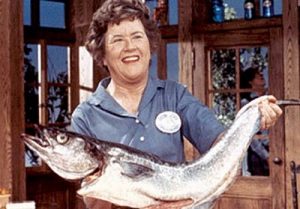 « Woman’s Guide to Everything: Sex and the Brain
Beyond The Big C »